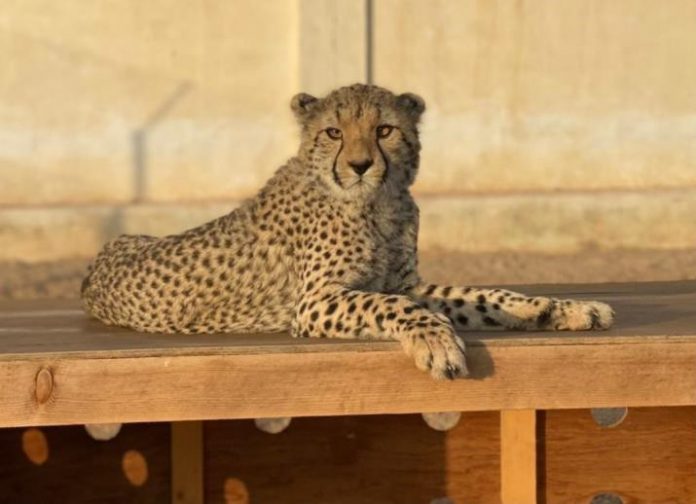 HARGEISA, Somaliland – 22 August 2021 — Cheetah Conservation Fund (CCF), the international organisation dedicated to conserving cheetahs in the wild, and its partner, Somaliland’s Ministry of Environment and Rural Development (MoERD), announce a ten-month period without any confiscation or interception events involving cheetah cubs. This notable downturn in activity follows the wave of rescue missions taking place between July and October 2020, which was capped by two interceptions in Hargeisa that netted eight traffickers and 13 cubs, and led to the arrest and conviction of Somaliland’s most notorious cub trafficker.

Since the arrest of Cabdiraxmaan Yusuf Mahdi, better known by his nickname Abdi Xayawaan (Abdi Animals), October 17, 2020, no other Somaliland citizen has been caught with cubs. Police intercepted Abdi Xayawaan and a member of his criminal enterprise in possession of 10 cheetah cubs following a separate trafficking bust on September 23. That day, six men were arrested in an undercover sting when they attempted to sell three cheetah cubs to a local Hargeisa resident. Police seized their mobile phones, and the data they obtained led them to Abdi Xayawaan. The six were convicted along with ringleader Abdi Xayawaan and his accomplice in November of 2020.

“These back-to-back cases are remarkable for large number of suspects appearing in court and because it is only the third and fourth time convictions have been obtained in cases involving cheetah trafficking.

Seven defendants received a one-year jail sentence with a small fine, but Cabdiraxmaan Yusuf Mahdi, a repeat offender who was arrested on three prior occasions, received a four-year term and a fine of three million Somaliland shillings. His sentence is the most serious sentence handed down by any African court in a wildlife trafficking case involving cheetahs”, said Minister Shukri H. Ismail of MoERD.

News of the conviction and several other factors have had a chilling effect on cheetah trafficking in Somaliland, according to MoERD.

“The Ministry believes there are several reasons for the ten-month quiet period. First, a CCF-MoERD joint media campaign documenting the 2020 confiscations and arrests generated awareness in the local communities about the illegal nature of cheetah trade. For many people, this was the first time they learned taking cubs is against the law. Second, MoERD has been working with our Somaliland Regional Coordinators to increase awareness for all of our wildlife laws and the penalties for breaking them. And third, there appears to be a decrease in cheetah cub trading between Somaliland and Yemen. It could be due to COVID-19 or because Somaliland has stepped up enforcement in the Gulf of Aden, or a combination of factors, but there are fewer Yemeni vessels attempting to illegally access our coast”, said Abdinasir Hersi, MoERD Director General.

CCF and MoERD are grateful for the respite, which has allowed them to focus on other aspects of their partnership. In addition to providing 24/7 care for 55 confiscated animals that live in CCF’s Safe Houses, CCF has a mandate to build capacity in Somaliland wildlife law enforcement with LICIT (Legal Intelligence/Cheetah Illicit Trade), a 2.75-year project funded by the UK Government through the Illegal Wildlife Trade Challenge Fund. CCF and LICIT partners International Fund for Animal Welfare (IFAW) and Legal Atlas, develop legal frameworks, fill in gaps in existing legislation, and provide training for government officials in both domestic and regional law enforcement. CCF and its partners are planning their next LICIT training in Hargeisa for this September.

“CCF is pleased by the cooperation between the Somaliland Police, Coast Guard, Ministry of Environment and Rural Development and the Somaliland courts system, which we support through LICIT. We consider this ten-month quiet period as significant progress in our efforts to stop cheetah trade”, said Dr Laurie Marker, Founder and Executive Director of CCF. “But while we are happy for the ground we gained, we know we still have a lot of work ahead of us”.

Ministry of Environment and Development, Republic of Somaliland

The Ministry of Environment and Rural Development (MoERD) mandate is to conserve, protect and manage national development of natural resources and the environment for the benefit of Somaliland people.

MoERD promotes the pastoral sector through sustainable development aimed at the eradication of poverty and improving living standards while ensuring that a protected and conserved environment will be available for future generations.

Conservation Fund (CCF) is the global leader in research and conservation of cheetahs and dedicated to saving the cheetah in the wild. Founded in 1990, CCF is an international non-profit organisation headquartered in Otjiwarongo, Namibia, the “Cheetah Capital of the World”, with a field base in Hargeisa, Somaliland. CCF takes a holistic approach to conservation, recognising that to help the species, we first must help the people who live alongside wildlife. CCF’s strategies are built on three pillars: research, education and conservation. CCF marked its 30th anniversary in 2020, making it the longest running and most successful conservation organisation for cheetahs. For more information, please visit www.cheetah.org.