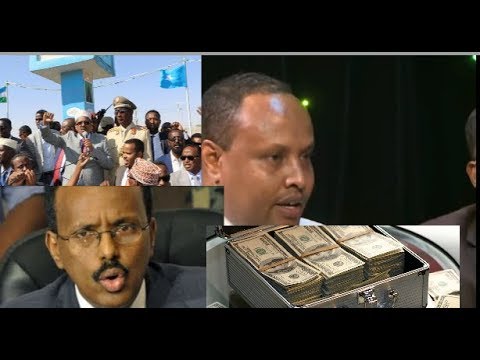 Chief Mohamoud Nouh Mohamed crossed over to Puntland with lieutenant colonel Arre right towards the end of a clan conflict which sporadically raged in and around the El Afwein, Sanaag, areas for some three to four years in the past.

Contradicting all expectations, the Chief joined the renegade colonel who formed a base in the Qardho, Puntland, district to ‘fight Somaliland’ until what he termed as injustices were rectified.

Chief Mohamoud, since then, discovered that the ex-petty thief and burglar had no worthy cause to fight over but had, instead, another agenda which linked him directly to President Farmajo and Somalia.

“I had grievances. Legitimate grievances relating to the conflict at hand. Many of us had. THose concerns were related to either the government or with whom we had the discord. All were within the Somaliland fold,” he said at a reception organized in his honor to welcome him back.

“We discovered over there (at Arre’s base) that some of us had a hidden agenda. The Somalia military insignia surfaced. Since our case rested with Somaliland, could be settled within Somaliland, we had no business with a Somalia presence, interference,” Chief Mohamoud disclosed.

Ex-lieutenant colonel was seen wearing the insignia of a Somalia army general at a recent press conference he held at his ‘base’, handing out single-leaf Dollar ‘salaries to his followers. This rank can only be bestowed by a president: the Somalia President, Farmajo. The handouts, it was also disclosed, came from Mogadishu – part of funds which the international community – ostensibly – meant to bolster Somalia army with in order to fight ‘terrorists’.

The Chief revealed that the ragtag militia which the deserter colonel put together, and the civilians like himself who supported him, thinking they had a legitimate case to highlight, did not expect that they were mere puppets on a Somalia stage with the strings pulled by Mogadishu all the while.

“We are of Somaliland, born of Somaliland, ready to die for Somaliland. This is our birthplace. The solution to anything that does not rest well with us lies here – can be found right here and not in Somalia,” he said.

Chief Mohamoud stated that, from there on, he would only work for ironing out whatever loose ends there were in order for the mediated peace in the area to take root.

At the time the Chief and the ex-colonel, belonging to the same side of clans fighting in the area, left with some other members, people did not understand why did that happen and especially at a time the conflict was brought under control and hostilities visibly cooling down.

The Chief’s disclosure now clarifies the matter to many who, at the time, contradicted voices which pointed out that there was a hidden hand in the conflict that wished it not to abate at all.

This is not the first time, the weak Farmajo government has revealed its hand in Somaliland affairs – a Somaliland that is a much better government than it can ever be in the next decade or so, as analysts contend. Villa Somalia is accused of financing sabotages, political rifts, social media influencers, and a select pick of politicians, traditional leaders, media practitioners and the young and impressionable to cloud the Somaliland quest of re-affirmed independence. It was only a little over a week ago that Somalia Federal Parliament members underlined the extent of the rot and corruption directed against Somaliland unity and how Farmajo and Khayre were spending untold of millions of Dollars to drive a wedge in the nation’s unity.

Chief Mohamoud’s return was preced Lieutenanttenant Colonel Jamal Bahad who, also, deserted the army to join colonel Arre but, like the Chief, returned to his hometown, Erigavo, last week denouncing Arre’s cause.

Colonel Arre, before he joined the army, was a petty burglar who took off roofs from abandoned homes in Erigavo to sell them in order to finance a drinking habit he had. He is still seen holding ‘press conferences’ inebriate and slurring words.