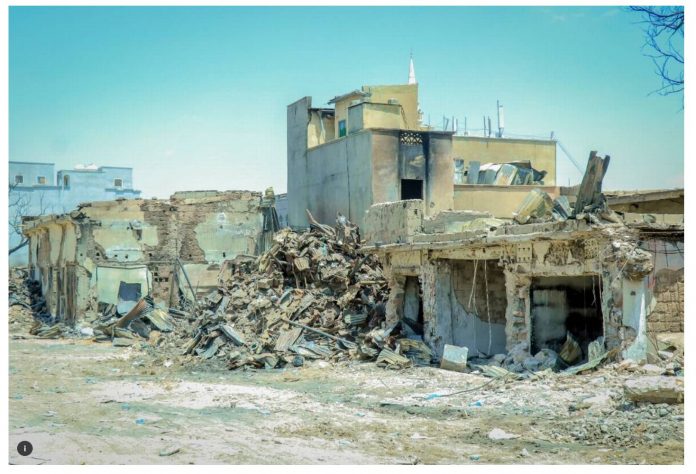 The 41-year-old earned more than $2,700 a month, enough to raise seven children single-handed and win the respect of her community over two decades of graft in the capital of Hargeisa.

Today, she stands under the midday sun near the gutted ruins of her old shop, behind a paltry offering of a few bananas and cabbages scattered over a wooden table. No match for her old display of camel cuts, nor her stock of household appliances.

“My life is starting from scratch because everything I had was taken away by the fire,” she told the Thomson Reuters Foundation by phone from central Hargeisa.

“I am the only breadwinner. I am here selling the little I have left. I could not just sit back and wait for handouts,” said Mahmud who had $10,000 worth of property destroyed.

Thousands of business owners in this breakaway region of Somalia have been left penniless after a massive fire swept through the sprawling Waheen market, engulfing hundreds of stores, stalls and restaurants on the eve of Ramadan.

The cause of the April 1 blaze – which raged for nearly 12 hours – is still under investigation; authorities say 27 people were hurt and some 2,000 small businesses damaged or destroyed.

Financial losses are estimated at up to $2 billion – a tremendous blow to the self-declared Horn of Africa nation and one of the poorest countries in the world.

Somaliland’s chamber of commerce said the losses accounted for 40 to 50% of Hargeisa’s economy.

Amina Mahmud, 41, rests under a table where she sells flour and rice near Waheen market in Hargeisa, Somaliland on April 9, 2022. Thomson Reuters Foundation/Muna Tosane

Resurrecting all those shattered lives won’t be easy, say economists, noting that Somaliland goes unrecognised by most of the world in a region plagued by conflict and climate shocks.

“The Waheen market fire has led to the near-destruction of the Somaliland economy. It has increased the unemployment rates which were already the highest in the region,” said Ugbad Hashi, an economist at the University of Hargeisa.

“Due to that tragedy, demand has increased and led to a dramatic rise in local market prices,” she said by phone. “This is in the midst of a devastating drought and biting inflation that exist in the country.”

Nestled along Africa’s northeast coast with the Gulf of Aden, Somaliland – with a population of 4.5 million – has operated independently of Somalia since 1991.

It has its own president, parliament, currency and international airport, yet it is not globally recognised – leaving it isolated in trade and investment and ineligible for loans from big international lenders such as the World Bank.

Much of the semi-arid region remains impoverished and under-developed. One in three Somalilanders live on less than $1.90 a day, the World Bank’s measure of extreme poverty.

But Waheen market offered a lifeline to the thousands of stall holders, shop keepers and sole traders who worked the sprawling site, drawing buyers from across the capital.

Established more than 30 years ago and spread over 5 sq km, it was the largest market in Somaliland, and the fourth biggest in the Horn of Africa.

From cafes to fruit stalls to clothes shops, the market was a success in a poor country, keeping countless families afloat.

According to the United Nations, the market provided income for 17,000 merchants and workers, with some 136,000 people indirectly affected by the blaze.

“Seeing the destruction caused by the Waheen market fire in #Hargeisa was difficult and heartbreaking,” tweeted United Nations coordinator Adam Abdelmoula after visiting the ruins.

“The scale of the destruction and its impact on its residents and economic life, both direct and indirect, cannot be overstated. It has devastated the city.”

The government has released almost $12 million to help small business owners and has launched an appeal for $2 billion to support 5,000 family enterprises.

This would include cash as well as temporary setups for traders to stay in business while the market is rebuilt.

The United Nations and some countries, such as Ethiopia, Djibouti, Kenya, Qatar and Britain, have pledged support.

“Saddened to see the aftermath of the fire in Hargeisa with such destruction in the open market that is the economic heart of the city, affecting many small and family enterprises,” tweeted British Prime Minister Boris Johnson.

Local citizens and businesses, along with Somalilanders in the diaspora from Minnesota to Wales are also raising funds.

Britain’s multiple world and Olympic long-distance champion Mo Farah, whose family is from Somaliland, has also started a GoFundMe page which has raised nearly £50,000 ($65,010).

“We need to provide for the small individual traders, many of whom were women, who now have no source of income,” said Farah.

But many merchants cannot wait.

“I used to have a butcher’s store in Waheen market, but it was totally destroyed by the fire,” said Aden Abdullahi, 47, by phone from Hargeisa.

“I am the father of eleven children so now I have no choice but to sell meat by a stream near the roadside.”

Locusts Stealing Lives: Fears of farmers, herders in Somaliland as a plague looms