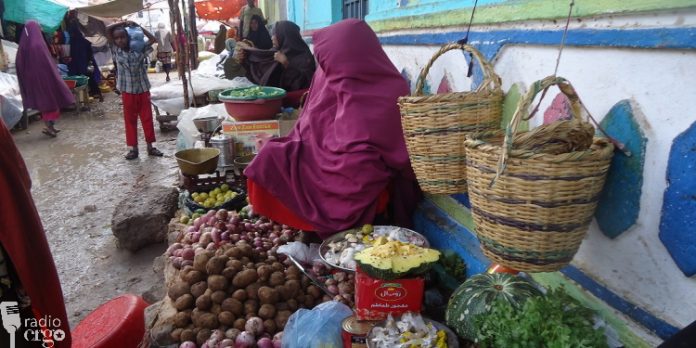 (ERGO) – After struggling for five years to provide just one meal a day for her family, Amina Abdi Muse is proud and happy to be cooking three meals a day, paying her house rent, and paying school fees for three of her six children.

Life turned around for Amina three months ago, when she received a $60 loan from the women’s rotating savings group that set up recently in Jarahoroto village, 26 kilometres north of Borama in Somaliland’s Awdal region. She used it to open a small business selling frankincense and women’s clothes.

“Life has changed for the better. I am earning from my sweat and making the money I didn’t have before,” she said.

Amina has been the sole breadwinner since her husband lost his job as a tractor driver. She makes seven dollars a day from her business and is hoping to buy land in Jarahoroto to build a house after getting a second loan from the women’s group.

She told Radio Ergo her new improved prospects motivate her to get up every morning. She aims to pay for her children’s education through university.

“I didn’t have money to buy my children food, let alone buying them books and pens. But now I am a trusted person who can ask for credit when I don’t have money, as they know I own a business and will be able to pay back later,” said Amina.

“When you are poor, no one will trust you with a debt. There is a huge difference in my life now because I have a stable income.”

The 25 group members each contributes a minimum of seven dollars a month to the fund. Those who have been able to save more can deposit larger amounts in the savings fund. The group prioritises lending to women from the families in their village who need the money most at the time. In the four months it has been operating, the group has loaned money to seven women, including Amina, who are able to pay back in affordable amounts.

Similar women’s rotating savings and loan schemes are also active in the nearby villages of Cadmadooni, Geed diqsi and Qabri dhaweed villages, all in Baki district. The groups have been changing the lives of local families.

Hawo Abdi Liban, the head of the women’s group in Geed diqsi, told Radio Ergo that they started the initiative to help each other instead of waiting for aid. They have helped eight women from Geed diqsi to start their own businesses.

“We came together to benefit the community and lift each other from poverty,” she said. “Our aim is to see everyone in our village having their own business to earn a living.”

Ifrah Hassan Abdi, a single mother of 10 in Geed diqsi, started a small grocery shop in May with $60 from the group. She took a further $230 loan in July to upgrade to a clothing shop.

She used to work as a cleaner at a local shop and could afford two meals a day for her children. Now she is cooking three meals daily. She has also returned four of her children to school after they dropped out a year ago due to her inability to pay the fees.

Ifrah receives no financial help from her ex-husband. She has rented a two-roomed house for herself and the children and moved out of their hut. She aspires to educate her children to university level.