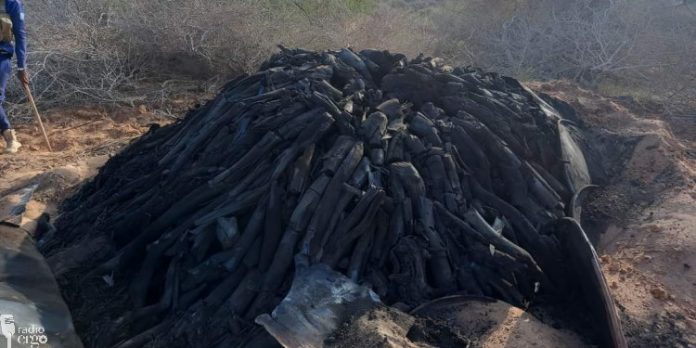 (ERGO) – Charcoal burning has reached a peak in rural areas in El-Afweyn district, in Somaliland’s Sanag region, putting drought-stricken pastoralists into conflict with the local authorities trying to stop deforestation.

Ismail Hassan Guleid started burning charcoal in 2017, after losing his entire herd of 200 goats to drought in Rijimo village, 40 km from El-afweyn. In recent months so much charcoal has been made that there are no trees left standing in the forest. He told Radio Ergo they are now burning the stumps of the felled trees.

“Trees are life and they feed the animals, and I know cutting trees is harmful to the land. But when it comes to choosing between cutting trees or saving people, I will cut trees,” he told Radio Ergo. “As I lost the livestock I depended on, I cut down trees so that my children don’t go hungry. I am just trying to provide for my children.”

With 10 children to support, Ismail says he has no other means of generating income. He nurses an injury to his hand sustained in June from felling trees.

“The country doesn’t have employment opportunities. If I could get a better job, I would have saved the land, but there is none,” he said.

Mohamed Abdi Elmi, a pastoralist in Darar wayne village, 105 km from El-afweyn, lost his 250 goats and 45 camels in 2019. He says he started burning charcoal to sell as he could not leave his wife and eight young children to go to look for work in the town. With 50 goats and five camels left, and none in good shape to sell, he is adamant that he has no choice.

“Lack of jobs is what forced us into cutting down the trees. We will stop if we get another job,” he said, adding: “We know the trees we are cutting contributes to lack of rain.”

Mohamed is part of an eight-man gang cutting trees in a forest near his house. He has been jailed several times after being caught for charcoal selling activities and in April spent a week in El-afweyn police cells.

The mayor of El-afweyn, Mohamed Digaale, told Radio Ergo that his office launched a campaign to stop cutting trees for charcoal on 10 November. The villages of Deri Yahye, Gedi Maal, Rijimo and Layma are the main areas where charcoal is being burned. The authorities have so far closed nine charcoal production centres and arrested two men.

“They have chain saws and move from one area to another without leaving the forest. They have burned a lot of charcoal. What they need is taken to them, including food and khat,” the mayor said.

The mayor said the gangs burning charcoal are armed with AK-47s and carry out attacks on police patrols. He disputed the claim that those involved are pastoralists desperate to provide for their families, saying they just want money to buy khat and cigarettes.

He said the authorities receive information from the local elders and a committee formed in the villages to help them to identify where charcoal burning activities are taking place.

Burning charcoal is illegal in Somaliland and attracts a penalty of three years’ imprisonment. However, the law is not fully implemented. There are specific markets for charcoal traders in big towns and the police at checkpoints entering towns usually fine the traders 800,000 to 1,000,000 Somaliland shillings, without confiscating their charcoal.