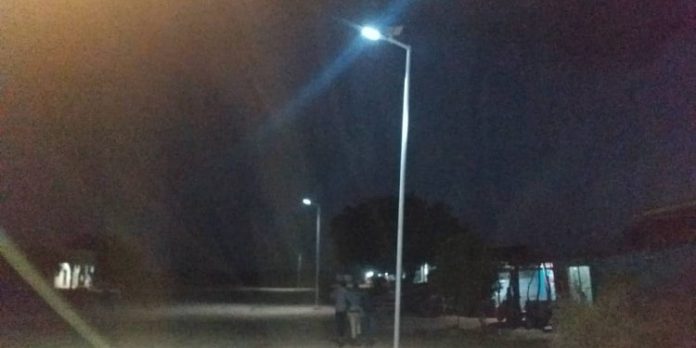 (ERGO) – “Everyone has a story to tell about the darkness,” said Saleban Mohamed Ismail, a resident of Diri-maraa village in Ugaas Madow in Somaliland, enjoying the glow of newly installed solar streetlights.

Last year he was attacked twice by a hyena as he walked home from a local shop in the dark. In 2018, he was hospitalised for two months after being bitten by a snake he stepped on at night.

“The snake was hidden in a dark place,” he told Radio Ergo. “The wild animal attacks in our village were all because of the darkness.”

The agro-pastoralist residents of this and five other rural villages around Ugaas Madow, 95 kilometres west of Berbera, are now feeling safer and socialising outside in the evening, thanks to lighting installed by Mohamed Hassan Dirir, a former government officer and aspiring politician from Hargeisa.

After spending a night in Ugaas Madow in 2018, where he has relatives, Mohamed experienced the enveloping darkness that limited people’s lives and determined to do something about it.

“I decided to light up the dark town and surrounding villages. I didn’t have any knowledge about solar streetlights, so I researched the best way to connect lights in a rural village when I returned to Hargeisa,” he told Radio Ergo.

Mohamed, 35, who was director at Somaliland’s ministry of water resources until September, began working on the project and gathering money from his own resources. He succeeded in completing the installation of 50 lamp posts with solar panels in the six villages in October.

In Diri-maraa, night life is now thriving with elders and youth out socialising well into the night. Saleban, a father of six, said the elders used to stay at home after nightfall, watching over their livestock for fear of wildlife attacks.

“There haven’t been any wildlife attacks in our village since the lights were installed,” said Saleban, who has a herd of 50 goats.

“People are selling goods under the light while others are out reading the Koran by the streetlight. The youth gather under the light to play ludo games in groups while the elders play chess,” he said.

In Go’da yar village, Abdi Sugule Egal said the lights had helped to reduce road accidents. Vehicles often used to veer off the road at night.

“The village is now well lit and night travellers can see it from far, they don’t get lost on the way anymore,” he said.

He added: “Personally, the streetlight has helped me, as the garbage that used to be dumped by locals outside my home has stopped. People can see each other now!”

Abdi, a father of five who herds 84 goats and seven cows in the village, believes his livestock will be safer from wildlife attacks. He told Radio Ergo that his livestock were attacked five times by wild animals this year, and four goats were killed. He stated that he now sleeps peacefully at night without worrying about his livestock.