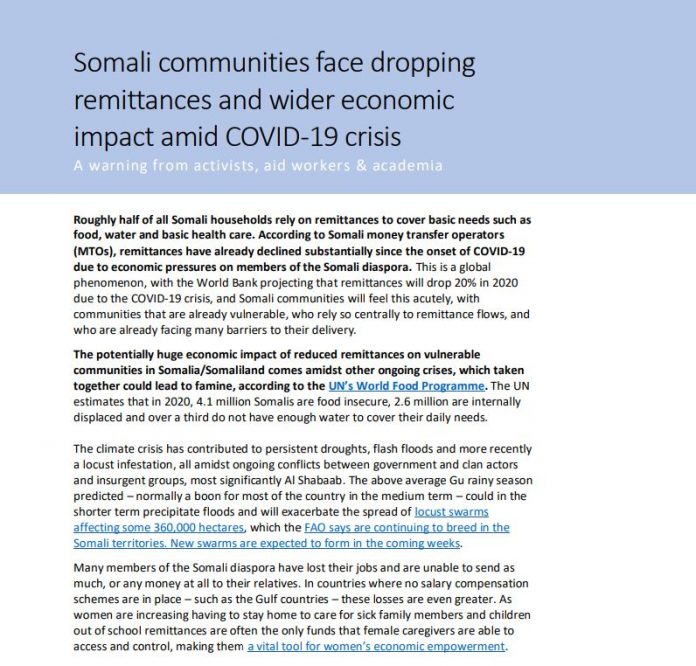 Roughly half of all Somali households rely on remittances to cover basic needs such as
food, water and basic health care. According to Somali money transfer operators
(MTOs), remittances have already declined substantially since the onset of COVID-19
due to economic pressures on members of the Somali diaspora. This is a global
phenomenon, with the World Bank projecting that remittances will drop 20% in 2020
due to the COVID-19 crisis, and Somali communities will feel this acutely, with
communities that are already vulnerable, who rely so centrally to remittance flows, and
who are already facing many barriers to their delivery.

The potentially huge economic impact of reduced remittances on vulnerable
communities in Somalia/Somaliland comes amidst other ongoing crises, which taken
together could lead to famine, according to the UN’s World Food Programme. The UN
estimates that in 2020, 4.1 million Somalis are food insecure, 2.6 million are internally
displaced and over a third do not have enough water to cover their daily needs.

The climate crisis has contributed to persistent droughts, flash floods and more recently
a locust infestation, all amidst ongoing conflicts between government and clan actors
and insurgent groups, most significantly Al Shabaab. The above average Gu rainy season
predicted – normally a boon for most of the country in the medium term – could in the
shorter term precipitate floods and will exacerbate the spread of locust swarms
affecting some 360,000 hectares, which the FAO says are continuing to breed in the
Somali territories. New swarms are expected to form in the coming weeks.

Many members of the Somali diaspora have lost their jobs and are unable to send as
much, or any money at all to their relatives. In countries where no salary compensation
schemes are in place – such as the Gulf countries – these losses are even greater. As
women are increasing having to stay home to care for sick family members and children
out of school remittances are often the only funds that female caregivers are able to
access and control, making them a vital tool for women’s economic empowerment.

For more information click the link below : Warning Remittances Lifeline_final