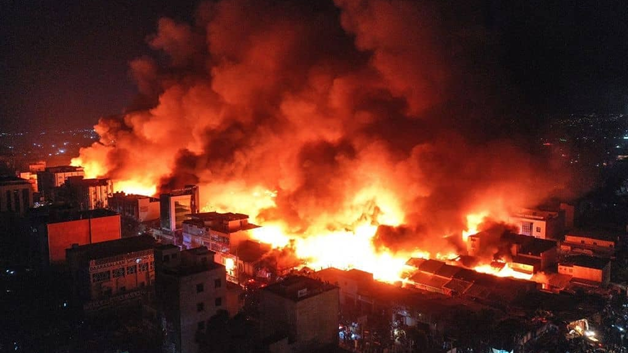 On the eve of Ramadan at the start of this month, the epic Waaheen market at the centre of Hargeisa, the capital of Somaliland, caught fire. The flames engulfed the entire market and took 12 hours to put out. There were no fatalities—it was Friday, the holy day of prayer for Muslims, and the market was closed—but the market no longer exists. Around 5,000 small businesses were impacted, with damages estimated at $2 billion so far.

For a country that legally speaking doesn’t exist in the eyes of the rest of the world—despite Somaliland existing independently of Somali for over 25 years—it’s a big financial hit for this former British protectorate that scrapes by on a tiny GDP. Stuck in political limbo, Somaliland struggles to access international funds that could assist with relief efforts.

‘The blow to the economy is the most severe in decades,’ Robleh Mohamud Raghe and Sulakha A. Hassan write in the weekly African newspaper the Continent. They argue that the economic damage represents 20 per cent of Somaliland’s GDP.

Somaliland was a British protectorate until 1960, when it united with the Italian colony of Somalia to the south to form the independent Republic of Somalia. But the union was undermined by disagreements and a perceived policy of neglect by the south that led to decades of struggle. It culminated in full civil war throughout the 1980s, during which much of Hargeisa was levelled by bombs. When dictator Siad Barre was forced from power in 1991, Somaliland broke away to declare itself a self-governing nation. Its bold gambit has never been officially recognised by the darlings of the international community.

I used to go to Somaliland all the time when I was working next door in Ethiopia. I would always stay amid the lovely worn glamour of the Oriental—replete with worn red carpets and pink walls—the city’s oldest hotel. Also, not only was it $15 a night—what a bargain—it was right next to the action of the market.

The market was a true labyrinthine warren. Amid passionate haggling in rapid-fire Somali, pyramids of colourful fruits and vegetables crowded beside stalls selling everything from famous brand-name perfumes and shampoos—possibly not all originals, admittedly—to household objects, electronics, shoes, clothes and fabrics. Over half of the traders at the market were women, including those clutching a machete beside hunks of raw meat laid out for purchase beneath the buzzing flies.

I always felt a surprising and incongruous sense of feeling at home in Hargeisa. It might have had something to do with how locals in Muslim dress would gather at 4 pm in the Oriental’s covered inner courtyard, a kind of modern caravanserai, for the afternoon tea service. I’d join them for tea and a slice of cake served by female staff—not one of the stainless steel tea pots still had a lid attached by the hinge—covered in brightly coloured Somali robes, intricate henna tattoos weaving across hands and up arms.

Walking around the city, I would regularly be approached by Somalilanders who’d ask me, often with a sharp East London accent, why on earth I had come. Somaliland doesn’t get many visitors—not being recognised as an official country isn’t good for tourism.

‘What brings you here, mate? Good to see ya!’ proclaimed one returned diaspora man, leaning out of his car window as I walked past a road junction.

Even in blisteringly hot Berbera on the coast you could find a faint British pulse. The building that once housed the British governor and staff when Berbera served as the capital of British Somaliland from 1888 to 1941 just about still stands. Like much of Berbera’s once handsome architecture, it is crumbling. Next to an enormous livestock pen to supply the ships departing for Middle Eastern customers, I found a ruined cemetery dotted with the broken headstones of young army captains who succumbed to illness.

Because of its unique situation, Somaliland has carved out a distinct identify and had to develop its own particular boot-strap way of doing things. Despite being a religiously conservative Muslim country—sharia law is included in the constitution, and all women cover their hair in public—within sight of Hargeisa’s myriad mosques are boisterous stalls selling khat, the plant whose shiny green leaves act as a mild stimulant when chewed. By mid-afternoon, and between the mosques’ daily calls to prayer, streets are full of men chewing away in search of mirqaan, the Somali word for the euphoric buzz the leaves can give. It all gives the place an aura of louche decadence, at odds with stuffy stereotypes associated with Islamic countries.

Ever since Somaliland broke away from Somalia, it has stood out as a peaceful outlier in the volatile Horn of Africa. I was often told that one of the main reasons the country is so peaceful compared to Somalia is due to its links with the more pragmatic and phlegmatic Brits compared to the legacy left by passionate and volatile Italians.

Despite their smiles and charm, Somalilanders, not surprisingly, take umbrage at their non-existent status in the eyes of the international community. They also highlight how they have built a functioning, democratic society from the scraps of civil war with scant outside assistance.

‘It seems that when you are doing things peacefully and helping yourself, then no one cares about you,’ Ayanle Salad Deria, the acting Somaliland ambassador to Ethiopia, told me about the international community’s apparent approach to his country’s situation.

Economic growth and development are key to peace and security, and there are fears that the economic knock inflicted by the market’s demise could undermine all of that. Somalilanders are used to suffering and having to build from the ground up following destruction. Let’s hope they get a bit more recognition and help this time.

A crowd funding campaign is being spearheaded by four-time Olympic gold medal winner Mo Farah, whose grandfather was born in Somaliland during its protectorate days. There is also #RebuildHargeisa, an initiative to mobilise both Somalilanders and the international community to respond to the gutting of Hargeisa.

‘Together, the people of Somaliland and like-minded friends around the world can rebuild Hargeisa from the ashes,’ Raghe and Hassan conclude hopefully. Let’s hope they are right.