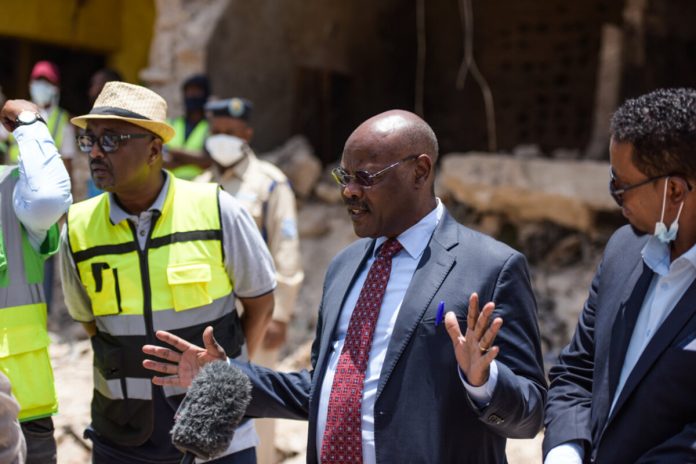 On a visit to Hargeisa today, a senior United Nations official pledged the world body’s support for efforts to rebuild the Waheen marketplace which was recently destroyed in a blaze.

“I am here primarily to reassure our partners in the government of Somaliland, civil society, the business community and all those affected, that the UN is here, and we are in this together,” the UN Resident Coordinator for Somalia, Adam Abdelmoula, said while visiting the ruins of the marketplace.

Located in central Hargeisa and spread out over five square kilometres, the Waheen marketplace was the largest market in Somaliland. It played a vital role in the local economy, with an estimated 5,000 businesses present, drawing sellers and shoppers from the city and surrounding communities. It is estimated that the market provided income for 17,000 merchants and workers and, taking their families into account, a total of around 136,000 people are directly affected.

Amidst the destruction, the UN official was shaken by what he saw and heard.

“For the first time, I can say that I’m very unhappy being in in Hargeisa. I have never said this before. It looks like a war zone; what you see behind me is a devastated city. Hargeisa used to be a centre of vibrancy, trade. It used to be a big hub… to see all of that which has been built by this resilient people for over 30 years ago go up in smoke overnight is truly heartbreaking,” said Mr. Abdelmoula, who also serves as the UN Secretary-General’s Deputy Special Representative to Somalia and Humanitarian Coordinator for Somalia.

Mr. Abdelmoula’s visit followed a week-long visit by a team of UN technical experts, who worked with the Somaliland authorities and the fire response committee, to assess the immediate, medium- and long-term support needed to help those affected by the blaze.

The joint preliminary assessment was presented to international donor partners in a meeting held in Nairobi last week. The UN team and partners are continuing with the collection of data, while also jointly working on a more detailed assessment report with Somaliland partners.

While in Hargeisa, the UN Resident Coordinator met with the Minister of Planning and National Development, Omar Ali Abdillahi, to discuss the support. He offered UN technical assistance in the designing and rebuilding of a new and safer marketplace.

“In the medium-term, we will continue to partner with the government and with the municipality to see to it that the UN contributes the technical input that is required for the designing of a fire-resistant, state-of-the-art, modern market that is compliant with the best safety standards,” Mr. Abdelmoula said.

He added that the new marketplace would also designed to be environmentally-friendly, accessible to people with disabilities, and with facilities especially for women, while also blending with local culture and traditions.

Also for the medium- and longer-term recovery efforts, the UN senior official said the rebuilding of the market would help with lessons learned to be used in other parts of Hargeisa.

“This is an opportunity for the rethinking of not only building back better, but also for looking at the other markets, which I understand are equally congested, and how can we decongest them, how could we use this opportunity to improve things and do so in a way that that would ensure safety, but also sustainability to incorporate best practices,” Mr. Abdelmoula said.

In terms of more immediate support, he flagged that recovery planning should address the needs of the most vulnerable people affected by the blaze. These include daily wage-earners, small business owners, female-headed households, internally displaced people, people with disabilities, refugees and minority groups.

“Those are, by far, the most affected. So as soon as we are certain the numbers and the data get disaggregated, we will coordinate very closely with the government to see to it that the UN contributes to the alleviation of the suffering of the most affected,” Mr. Abdelmoula said, and also noting the government had been providing cash handouts to those some of those most in need.

While in Hargeisa, the UN senior official also met with one of the city’s Deputy Mayors, Khadar Ahmed Omer, and city councillors, as well as members of the response committee.

“The total loss of property and impact of the fire in the Waahen market has been estimated to be around $1.5 to $2 billion. So far, we have received less than $20 million and so we ask the world to help us in the reconstruction of the market as well support to all those who lost property,” the deputy mayor said.

He added that a list had finalized with around 5,000 people identified as victims who lost property in the inferno, and that there were many more affected people who were employed in businesses at the marketplace.

According to Somaliland’s response committee established to lead the immediate relief efforts and planning for the market’s reconstruction, the destruction of so many goods has led to scarcity and inflation in Hargeisa.